Skip to content
Sevenoaks Ladies 8 Bromley Ladies 2
Sevenoaks 106 Bromley 82
Another fine victory in this five-rink game for the ladies, but well earned as the overall shots were very close for the first two-thirds of the match until Sevenoaks gradually pulled away for a relatively comfortable win in the end.
The teams skipped by Ann Munro and Margaret Elsdon maintained a steady lead throughout winning 23-12 and 23-16 respectively.   Sylvia Riley, Diana Purssell, Sue Wallis and Brenda Bennett were having a very tight game up until the finish of the 16th end when the score was 13-16 in favour of Bromley.   The ladies saved their best form for the last five ends when they notched up a further 16 shots for the prime performance of the day 29-16.

A very good day for the ladies in this 5 rink game.   Linda George, Joy-Ann Hemmings, Valerie McNally and Ann Monro romped home 31-15 for the best performance of the day.  Marian Greenouff skipped her team to a 23-10 win; four shots on the last two ends enabled Anne Welch’s rink to sneak a 21-20 victory;  recovering from 5-14 down, Margaret Elsdon’s ladies led 20-17 with one end to play but unfortunately dropped three shots, but still a good effort to draw.   Only the captain’s rink floundered on the day.

Again the atmosphere was good, this game started off tight with the score at 6 ends 36-35, we gained a little ground with the score at 12 ends 87-71, Bromley Town fought back but Sevenoaks went on to secure a win at 18 ends of 132-121 winning 3 triples, losing on 4.  The Top Rink on this game being Marian Greenouff, Les Gritton and Phil Pike by just 1 shot from Eve Strudwick’s team.

A great start to 2020 I have to say thank you to all the players who participated given that these two matches were only four days apart with both two Ladies Kent and two Mens Kent games also being scheduled within an eight day period.

We managed to field 6 rinks against a strong Stone Lodge team at home at Hollybush.  Despite some encouraging starts on several rinks we unfortunately ended up winning only one and losing overall by 81 to 156 shots.

Congratulations however to the winning team of Brian Howard, George Thomson, Reg Day and Tony Buddin who were at one stage down 1 to 10 but clawed their way back to win 18 to 13.

The Ladies put up a good show, winning on two rinks and ‘almost’ winning on another!

Joyce Allen, Doris Chapman, Joan Moffat and Marian Greenouff made a dreadful start, trailing 2-14 after 8 ends.  However the tide turned quickly as they won 5 out of the next 6 ends (including a count of 7 on one end) to take the lead 18-15.  White Oak rallied to lead

Dot Fuller, captain for the day, joined forces with Sylvia Riley, Sue Wallis and Brenda Bennett.  In a very close scoring game, Sevenoaks trailed 12-15 after 20 ends.  However, the ladies played a magnificent final end with four woods round the jack before the skips went to bowl.  Brenda added another shot but surprisingly the White Oak skipped, who had played very well all afternoon, failed with both her bowls to change the situation so Sevenoaks graciously snatched victory 17-15 from the jaws of defeat!

Margaret Elsdon skipped a team who were never behind for 20 ends, holding a one shot lead 19-18 going into the final end.   But it was not to be.   White Oak held one shot to draw but their skip drew a perfect last bowl to finish and clinch a 20-19 win.

This game got off to a tight start, with the score at 6 ends 44-45, we gained momentum and  at 12 ends were leading 106-76, with BBDBA continuing to struggle Sevenoaks went on to secure a win at 18 ends of 166-112.   It was as usual conducted in a nice friendly atmosphere, winning 7 triples and just losing on 1.   The Top Rink was won by Peter Hicks, Ann Munro and Gerald Gardiner. Well done.

Yes, it was a special day for us men on Sunday, as we had 6 full rinks playing, (first time in a while), and we won on one rink.

The final score on Sunday was 184 Ashford and 65 Sevenoaks. On one rink we lost 62 – 4. On our winning rink our 4 players were Brian Akery (skip), Brian George, David Leaver and Tony Garvey and the score was 22- 16 so well done

Ashford had won away the previous day 9 – 1, so we were in good company..

The ladies put up a good show in their first Kent League match of 2020 against The Royals but went down narrowly by 118-102 and 4-2 on the rinks.

Clare Jolley, Angela Checksfield, Anne Welch and Brenda Bennett trailed for most of their game but finished extremely strongly winning 15 shots over the last five ends for a 25-17 victory. Dot Fuller, Lynn Thomson, Mary Burch and Marian Greenouff held the initiative throughout winning 20-14.

Skip Ann Munro lost by 2 shots.   Margret Elsdon was level 16-16 at 17 ends and Eve Strudwick 12-12 also at 17 ends, although both rinks fell away over the latter stages. 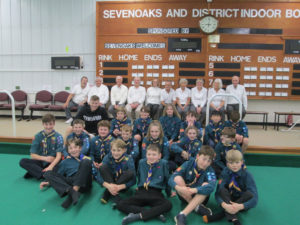 The 15th Sevenoaks (Otford) Scout Group spent an evening at the Club on 12th December.  A first experience of bowls for all of them.  The many helpers did their best to coach, encourage and entertain.   We hope some of them will return and maybe join our Sunday Youth Group.

Having obtained a good result on our home match we were hoping to repeat it Away.  Alas this was not to be.   Angel were in good form on their home rinks,  they quickly took the lead across four rinks and held them.  Margaret Elsdon, Sally Garvey, Linda Fardell, and Angela Checksfield had a good game reaching the final end one point up.  Unfortunately Angel scored two point on this end pipping them to a win.  It was not a total wipe-out.   Brenda Bennett, Val McNally, Diane P and Clare Jolley won their rink, winning by 5 shots